Porter Jenkins:
“Give it a Try”: How Taking a Risk on AI Changed my Life

标题：“Give it a Try”: How Taking a Risk on AI Changed my Life

“Give it a Try”: How Taking a Risk on AI Changed my Life
Porter Jenkins
April 2021
I grew up in a small town in rural Ohio, USA, where my life was very quiet and very average. All of my friends looked just like me, and most of them live within a few miles of where we grew up to this day.
（曾经我也只是一个普普通通的小孩，跟别人没啥两样……）
Ten years later, by a strange twist of fate, in April of 2019 I found myself in Hangzhou, China speaking to a packed crowd at the 2050 conference, giving an introduction to Artificial Intelligence. As I looked up from the stage, I could see faces in the crowd from all over the world; faces from China, India, Europe, and America. It was one of the most memorable experiences of my life.
（谁知道十年后我会在杭州给一群来自世界各地的人讲什么人工智能入门？） 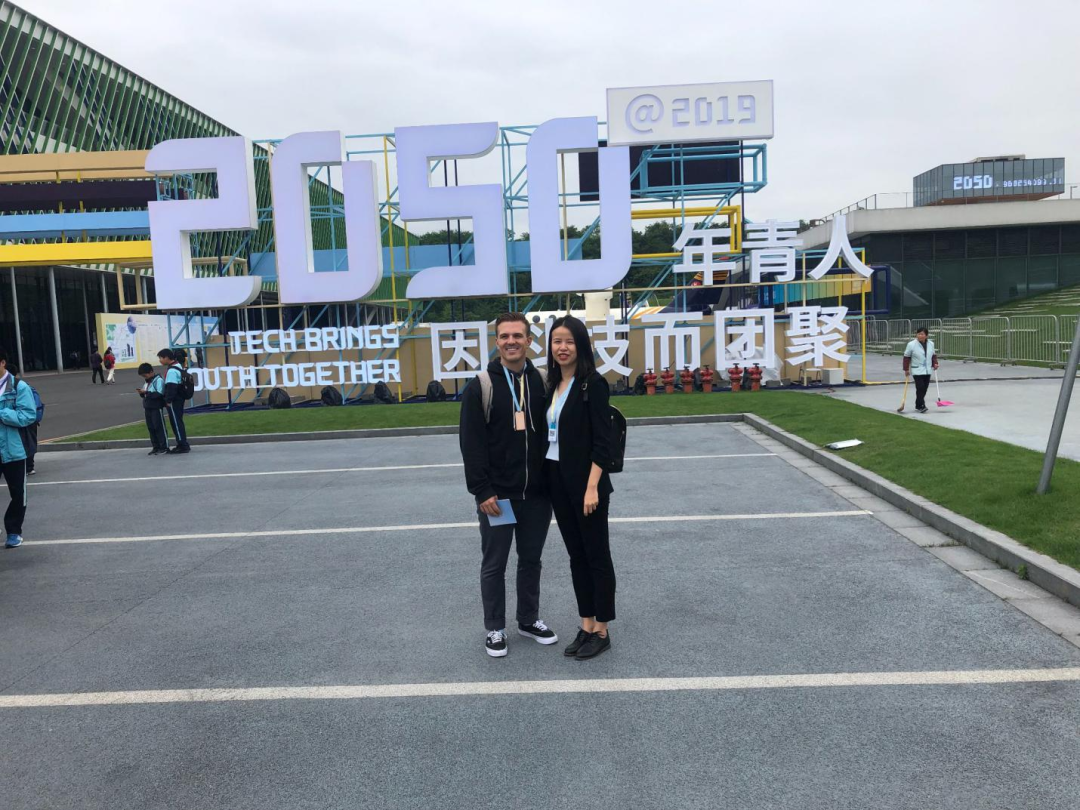 Jessie and I outside of 2050 in Hangzhou, China
（右边的就是黎小姐姐，左边的就是Jenkins）
When I was 18, like most young people, I was struggling to know what I wanted to do with my life. I was drawn towards mathematics because I felt it was objective: you can’t have two right answers when solving a math problem. Still searching for what I wanted to do with my life, I left University to serve as a missionary for the Mormon church, also called the Church of Jesus Christ of Latter-day Saints. I had the unique opportunity to spend two years helping with humanitarian efforts for immigrants coming across the Mexican border into California. It greatly changed my perspective.
（一个曾经热爱数学的小孩子如何开始走上了一条为全人类做贡献的道路）
Eventually, I returned back to University to continue my education; deep down I knew that education would be the key to my success in life. By 2011, I noticed the world had changed since I had been away. Life seemed to be engulfed by technology. Everywhere I looked people were using smartphones, which at the time had only recently been invented. New and exciting technologies were changing how people interacted with each other. This was the so-called “big data” era, and I was captivated by it. I had an intuition that data would continue to change the world, and I wanted to be a part of it. So in 2012 I changed my major to Statistics. Here, I felt like I could learn the skills necessary to identify patterns and make predictions from data.
（结果绕了一大圈又掉进了“大数据”的坑里）
After graduation 2014, I took a job working with a team of data scientists building predictive models for banks. It was very interesting, but I quickly realized there was a lot I did not understand.
（我虽然跟数据科学家一起工作，但我实在啥都不懂）
One day, my boss, who was also a Finance professor, brought me into his office and said, “Porter, I think you should get a PhD.”
（但是我的金融教授老板竟然推荐我去读个PhD？！）
“That’s ridiculous”, I said, laughing under my breath. “I was a pretty average student in my Statistics program, I don’t think I’m smart enough to do a PhD.”
“Yes, you are”. He said. “You definitely have it in you… if you are willing to give it a try.”

“Give it a try? That’s an interesting way to frame dedicating five years of your life to writing a dissertation” But deep down, I knew he was right.
（那就……试试呗？）
I’ve always felt like taking risks in life is prerequisite to do anything interesting. Before I knew it, I was investigating graduate schools and taking entrance exams. By 2016, I was enrolled in a PhD program at Penn State University, 2,000 miles away from where I was living in Utah. It was a big risk. My intent was to master techniques that could be used to learn “interesting” things from data. My friends, who were all economists, persuaded me to begin a PhD in marketing.

Historically, Marketing has not been a data-driven field. However, over the past decade or so, a deluge of marketing data has changed how people view connecting consumers with products. Unfortunately, after two semesters I realized that Marketing was not for me. Despite massive amounts of data at their fingertips, marketers still tend towards simplistic economic models. They study the data, but in the end, theories are what interest them. I was unhappy and considered dropping out.
（我听他们的话读了两个学期之后觉得这个死理论派的学科实在太坑了，一点儿也不data-driven，都想跑路了）
Meanwhile, I was taking every computing class I could related to Artificial Intelligence. I found it captivating; I realized that teaching machines to amazing things through interacting with massive datasets was exactly what I wanted to do. At the time, I was also homesick, so I applied to another University near my family in Utah, this time for a Master’s in Computer Science. But I was rejected.

Feeling somewhat hopeless, in my third semester I took a Data Mining course from Zhenhui (Jessie) Li. I quickly fell in love with the concepts she was teaching. After a few weeks, I made another risky move: I asked Jessie if I could join her research lab. It’s quite uncommon for students to change their PhD major, but I thought I would at least “give it a try.”

“What’s the worst that could happen?” I asked myself. “She says no?”
（反正死猪不怕开水烫，就算被拒了又能咋地？）
Jessie took a big gamble, but she did accept me into her lab. I was an unproven marketing student, trying to join her research lab in Computer Science. Compared to her other students, I felt like an “imposter.” But I was lucky she believed in me. I worked very hard to catch up and improve my computing skills. By 2019, I even landed an internship at a top American social media company in San Francisco.
（黎小姐姐竟然同意了！她同意了我这个marketing学渣加入了她的计算机实验室！） 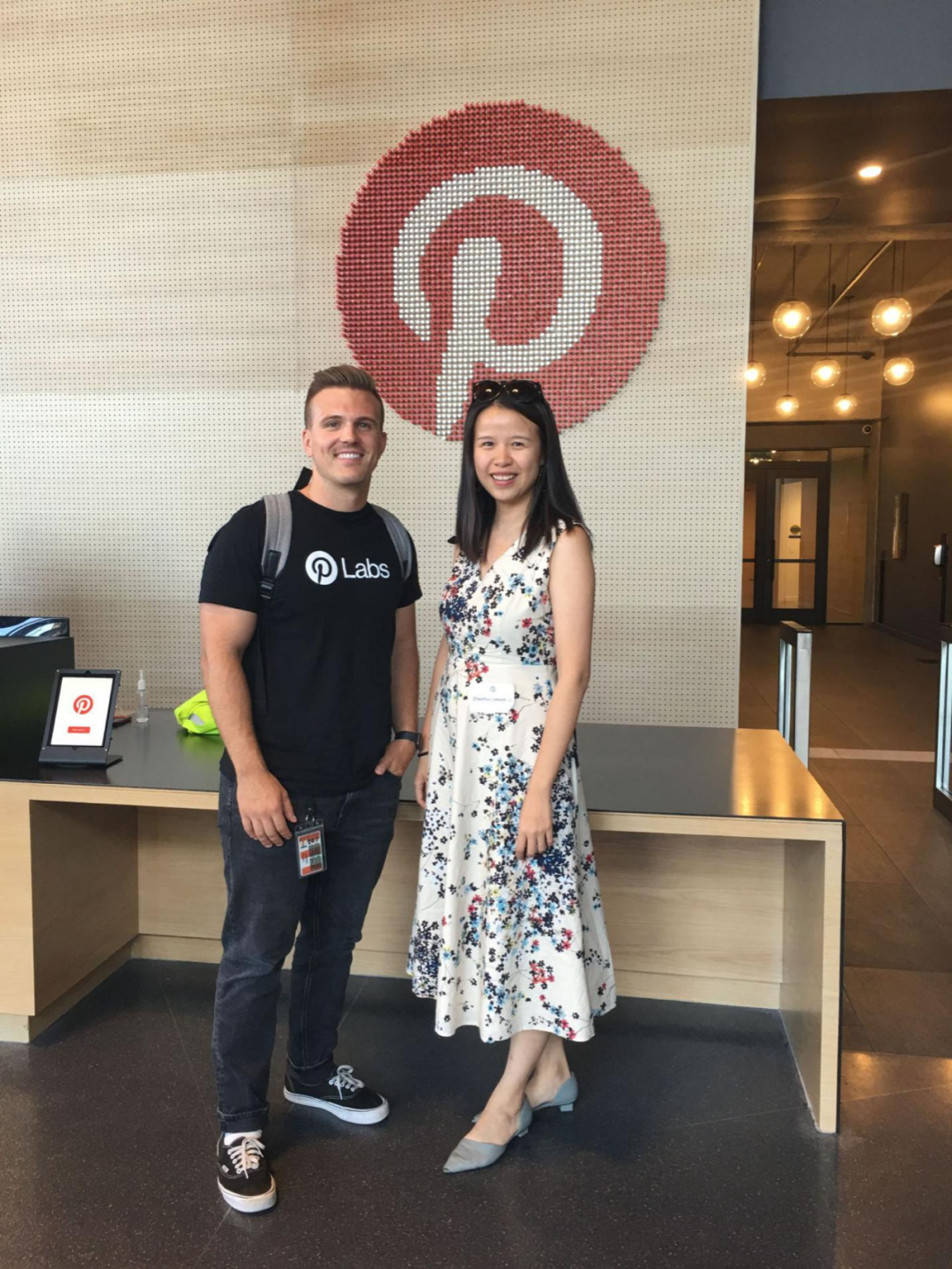 Jessie visiting me at the Pinterest HQ, in downtown San Francisco
（经过不懈的努力我终于在知名大厂找到了一份实习工）
In the fall of 2019, I returned to campus excited from my summer as a software engineer at Pinterest. I had performed well and they made me a full-time offer to return after I graduated. I met with Jessie to discuss the details of my graduation so I could go work at Pinterest. Going into the meeting, my goal was to convince her to let me graduate the following summer.

As I laid out my plans, Jessie was quiet and just listened. When I was done “convincing” her she said, “have you considered applying for a faculty job?”
（结果黎小姐姐居然问我要不要考虑以后干脆就走学术路线？）
“A faculty job?”, I nearly laughed out loud as I repeated her question. I literally thought she was making a joke. “No, definitely not.” I responded. “There’s just no chance.”
（开什么玩笑！像我这种学渣怎么可能争取到教职呢？）
Academic jobs in the United States are very competitive, and felt like my publication record was below most candidates in the market.
（米国的学术竞争真的很激烈，我的论文数量又实在不咋地）
Jessie responded and said, “I think you can just give it a try. What’s the harm in trying?”
（黎小姐姐又说了：试试又能咋地呢？）
Recalling a friend from her PhD program that didn’t have many papers, but landed a top job at Notre Dame University, she gave me a few tips to improve my chances. I did everything she said.

By summer early 2020, I was actively interviewing with a handful of Universities, in Utah, where my wife is from. But, like the rest of the world, my plans were derailed by the pandemic. Most universities were implementing hiring freezes in anticipation of the economic hardships most states in the US were likely to incur. But I kept trying. By autumn of 2020, I had a series of final interviews set up with my Alma Mater, Brigham Young University. Ultimately, the faculty liked my research and made me an offer as assistant professor in the Computer Science department!

When I look back, it truly was an improbable sequence of events. My nonlinear path led me through Mathematics, Statistics, Marketing, to Hangzhou China, San Francisco, and finally to the Computer Science halls of BYU. Now I do exciting academic research in AI, and have collaborated with startups building AI technology for Coca-Cola. My path simply could not have been predicted when it began. But each time I was faced with a difficult decision, I was always willing to “give it a try”, take a risk and try something new.
（所以我这几年的经历证明，试试看总是可以试试的） 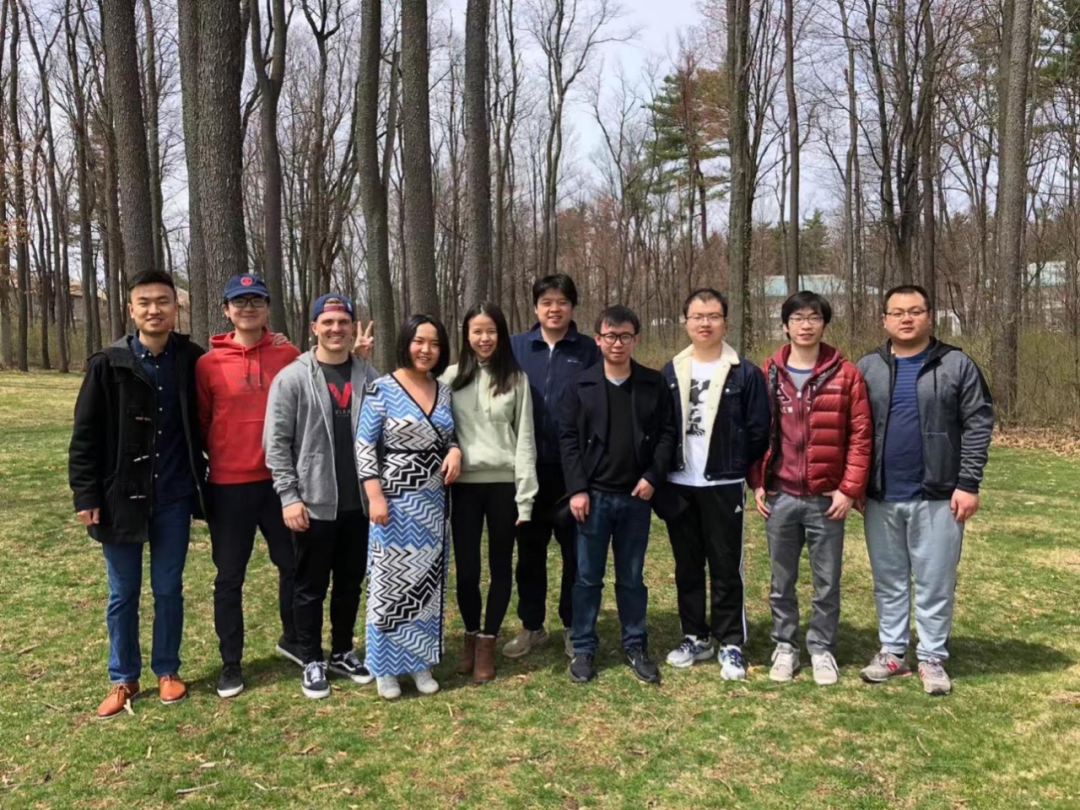 Jessie’s research lab, in April 2018
（这就是黎小姐姐的实验室成员）
I feel like my story is a key part of what 2050 is about: bringing people together to change the world through technology. My small world was changed because I had great mentors, like Jessie, who believed in me. And now I try to impact the world by creating new, data-driven technology.

I hope that any young person who might be reading this might be inspired by my story. I am an average person who has worked hard, and never been afraid of trying new things. Amazing events have unfolded in my life as a result. Whatever it is you’re passionate about, never be afraid to “give it a try”, and build the future you long for.
（希望我这碗鸡汤大家喝得愉快！）